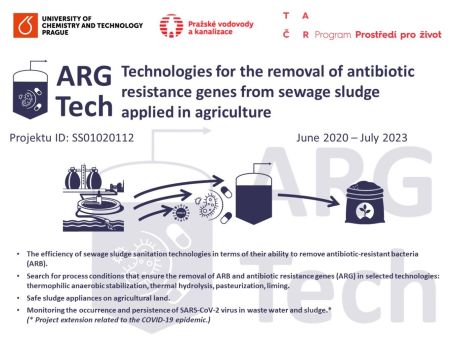 Start of the ARG Tech project

UCT Prague together with the water utility Pražské vodovody a kanalizace, a.s. from Veolia group works on the development of technologies for the removal of antibiotic-resistant bacteria from sewage sludge and monitors the occurrence of the precursor of COVID-19 in wastewater.

The current dry episodes create demand for organic matter in agriculture, which increases water retention in the soil. Stabilized sewage sludge can (despite its use as fertilizer) largely satisfy this demand. Newly introduced tightening of legislation for the application of sludge in agriculture concerns the introduction of pathogenic microorganisms, heavy metals, pesticides and drug residues into the soil. However, the risk associated with the spread of antibiotic-resistant bacteria (ARB), which can occur with the application of sludge in agriculture, has not yet been systematically addressed. It is also not clear what technologies can be used to eliminate the presence of ARB.

Monitoring the spread of ARB in the environment has recently received much attention in view of the alarming increase in the number of patients who do not respond to antibiotic treatment, even in relatively common diseases such as pneumonia or tuberculosis. One of the ways in which ARB spreads in the environment is effluents from wastewater treatment plants (WWTPs) and sewage sludge, which is used to fertilize agricultural land. Through agricultural crops, ARB can reach the food chain, endangering the human population.

Several studies have already been published comparing the occurrence of various ARBs in WWTP effluents on a European and global scale, but so far, sufficient information on the situation in the Czech Republic is lacking.

In June of this year, the teams of the University of Chemistry and Technology in Prague and the Prague water utility (PVK a.s.) started the joint ARG Tech project (Technology for removal of antibiotic resistance genes from sewage sludge applied in agriculture), which deals with testing ARB removal efficiency in available sewage sanitation technologies such as thermophilic anaerobic sludge stabilization, thermal hydrolysis, pasteurization, and liming. The aim of the project is to design such parameters of sludge sanitation processes that will ensure the removal of ARB and thus enable the safe use of sludge as an agricultural fertilizer.

In connection with the COVID-19 pandemic, the ARG Tech project was extended to include long-term monitoring of SARS-CoV-2 - the precursor of COVID-19 - in wastewater. In the Prague sewer network, 20 sampling points were selected, which represent various types of settlements such as Prague housing estates, the city center, university dormitories, hospitals or Václav Havel Airport. The presence of the virus will be monitored for two years, in most locations with a two-week interval. We assume that the occurrence of the virus in wastewater will correlate with the spread of the disease in the population, and that this monitoring may contribute to the early detection of the arrival of further waves of the COVID-19 epidemic (not only) in Prague.